What Happens If You Don’t Pick Up Your Dog Poop?

We get it, it is annoying to constantly keep up with your dog’s business. If you have more than one dog, or a dog with a sensitive stomach, chances are you have quite the clean-up on your hands. Is it okay to just leave the poop outside, even if it’s just for a few days? Unfortunately, no. The EPA considers dog poop to be as toxic to the environment as other major pollutants such as oil. Here’s what happens if you don’t pick up your dog’s poop.

Whether it’s your backyard or a dog park, dog poop quickly seeps into the soil. Your dog might be healthy, but that doesn’t mean that his or her poop is healthy itself. It will quickly become a breeding ground for other harmful bacteria in the soil, such as salmonella and E. coli.

There’s also a chance that your dog has a minor infection of roundworms, tapeworms, or other parasites that aren’t causing them problems now but will infect the soil and may get worse. These infections can all be passed onto humans who come into contact with the soil, especially children who might put the soil in their mouth. Even after you pick up the poop, the bacteria and parasites are still there.

Once the soil is polluted, rainwater will spread the pollution into the water system. Rain that pours over your property will end up in local greenspaces where the bacteria will spread. There’s no filtration system in nearby green areas to protect plants, animals and even other healthy kinds of bacteria.

It will also end up in your local water system, which is not meant to filter out pathogens from dog poop, at least not on the scale that our dogs create them. Urban areas are just too dense with dogs for the water system, although certain rural areas may fair better. Dog poop is actually the third largest cause of water pollution in the United States for this reason.

Dog poop can actually be a health problem for dogs as well as for humans and wildlife. They can retain and even breed the specific pathogens that get dogs sick. This includes things like parvo virus, a serious flu-like illness for dogs, or campylobacteria which causes vomiting and swollen lymph nodes. If you have multiple dogs, they can infect each other through contact with poop. Some dogs will pick up the unfortunate habit of eating poop, and this can be a serious problem for their health.

What kind of impression do you want to make on the neighborhood? Even a few stray droppings can upset the neighbors, especially those who don’t have dogs and don’t understand the struggle to pick up after them.

Pooped Tracked into the House

While all of these problems can happen outside of the home, there’s also the possibility that your dog can drag poop into your home. From there, the same bacteria can infect your home, never mind the mess and smell.

It’s very important to keep up with your dog’s poop schedule to prevent all of these problems. 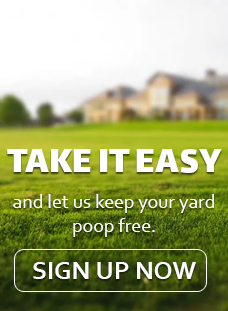